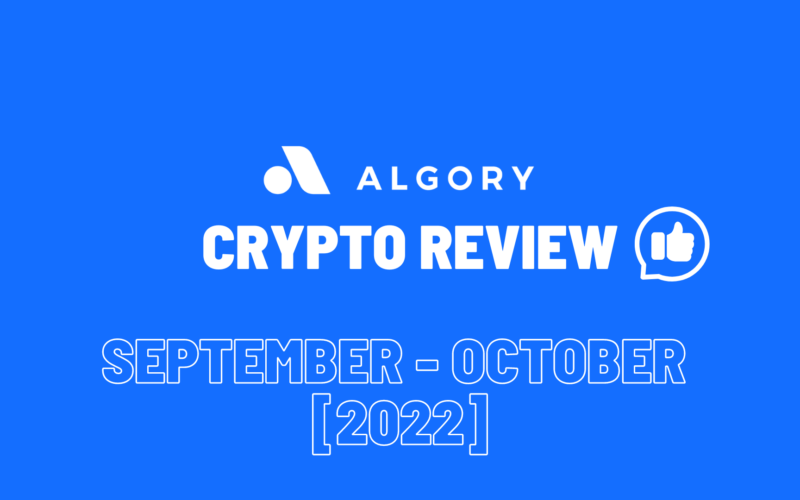 This article provides a summary of the monthly crypto news for the months of September and October.

When the value of the US dollar rose, Robert Kiyosaki considered Bitcoin a “buying opportunity.”

In a tweet to his 2.1 million followers on October 2, the author said that the prices of the three commodities — frequently referred to as “safe haven” assets — would continue falling as the U.S. currency strengthened, confirming its value until the “FED pivots” and decreases interest rates.

In a post from the day before, Kiyosaki claimed that this “pivot” might occur as early as January 2023, resulting in a “fall” of the U.S. dollar similar to the recent collapse of the British pound.

“Will the U.S. dollar follow the British pound? I think it will. Kiyosaki said, “I anticipate the US currency will fall by January 2023 once the Fed reverses course,” adding, “I will not be a victim of the F*CKED FED.”

Kiyosaki has been an advocate for asset classes that the Fed cannot directly influence since May 2020, when he cautioned investors to “Get Bitcoin and rescue yourselves” in reaction to the Fed’s initial mass money creation operations in response to the COVID-19 epidemic.

In a recent interview on Rich Dad, Kiyosaki said that despite not thinking Bitcoin has any value, he continues to like it.

McDonald’s began accepting Bitcoin as a payment method in Lugano, a city with a population of 63,000 in the Italian-speaking part of Switzerland, which is becoming a hub for crypto acceptance in Western Europe.

Bitcoin Magazine released on Oct. 3 on Twitter a one-minute video showing buying meals at McDonald’s digital kiosk and then paying for it at the normal register using a mobile app. The Tether USDT logo was discovered beside the Bitcoin sign on the credit cash machine, which is not unexpected given that the city of Lugano stated in March 2022 that it will recognize Bitcoin, Tether, and the LVGA token as legal money.

In addition to enabling inhabitants of Lugano to pay their taxes using cryptocurrency, the initiative will facilitate payments for parking fines, public services, and student tuition expenses. It is anticipated that more than 200 stores and companies in the region would accept cryptocurrency payments for products and services.

Nasdaq required clear regulations before launching a cryptocurrency exchange, according to a senior executive.

Nasdaq, the largest stock exchange in the United States, has no imminent plans to develop a cryptocurrency exchange, according to Tal Cohen, the company’s executive vice president.

Cohen said in an interview with Bloomberg that the retail side of the cryptocurrency business is sufficiently saturated and that there are sufficient crypto exchanges that cater to individual buyers. He stated that his company will maintain its concentration on the 20 September-launched crypto custody services.

Cohen also offered information on additional crypto-related services that the exchange is developing, particularly asset transfer and execution capabilities on the platform.

The crypto market has seen another price cycle like clockwork, but U.S. authorities have failed to provide a clear framework for bringing crypto exchanges under the law.

The U.S. Securities and Exchange Commission, headed by Gary Gensler, has been fairly public about the market’s weaknesses. Despite many requests from Congress for clearer rules, the United States has made little progress on the regulatory front.

From touchdowns to digital assets: a former NFL player enters the market

Lewis Neal, a former defensive lineman for the National Football League (NFL), suggested that when things don’t go as planned in your job, you can seek out chances in other sectors.

Neal revealed at the Blockchain Economy Dubai Summit 2022 how he moved from playing professional football to investigating money, which ultimately lead him to Bitcoin and crypto wallets.

Neal mentioned that he had big aspirations when he began playing football. He believed, like many ambitious professional sportsmen, that he would be the center of attention. However, his expectations were not fulfilled. He said:

“I thought I was going to get a lot of playing time. During that year, though, I was a substitute. […] So, I had to develop another skill that can be life-changing for my family and myself. This is what motivated me to enter the financial profession.

The former football star traded currencies, futures, and commodities before discovering cryptocurrency. “As one trades, he or she is exposed to more asset classes. And this is precisely how I was introduced to Bitcoin and other crypto asset classes,” he stated. Eventually, he became the CEO of the Kryptic crypto wallet initiative.

The 10th of October saw the release of the State Budget for 2023, which included a brief section addressing the taxation of cryptocurrencies, which have been untaxed by the Portuguese tax authorities so far since digital assets are not recognized as legal cash.

The section states that the Portuguese government plans to establish a “wide and suitable” tax framework for cryptocurrencies in terms of their categorization and taxes.

In addition, the State Budget recommends a 4% tax on free transfers of cryptocurrencies in cases of inheritance, as well as stamp taxes on commissions made by cryptocurrency-industry middlemen.

The section continues by stressing that the proposed tax structure provides security and legal certainty in an attempt to support the crypto economy.

Although the concept is not novel, the Portuguese parliament will have the last word on whether the proposed bitcoin tax adjustments will be implemented. In a parliamentary working session in March 2022, the Secretary of State for Tax Affairs, António Mendonca Mendes, explained the reason for taxing cryptocurrencies, given that users were realizing financial gains.

Users of Gate.io would be in danger when fraudsters fake a giveaway on a compromised Twitter account.

Over one million consumers were at danger of losing cash due to an alleged fake Tether USDT giveaway after hackers took over the official Twitter account of crypto exchange Gate.io.

Twitter is the most effective tool for communicating with the crypto community. As a consequence, the practice of hacking official Twitter handles of verified accounts in order to promote fraud is on the increase.

The fraudulent website aggressively promoted a false giveaway of 500,000 USDT and requested that visitors link their wallets (such as MetaMask) in order to collect the incentives. Once a person linked their wallet to the bogus website, the hackers will obtain access to their current cash and ultimately deplete their holdings.

Investors were comforted by Gate.io’s promise to cover any damages incurred as a result of the event.

At a time when crypto frauds are expected to reach all-time highs, investors are encouraged to cross-check the URLs of trading platforms to verify the integrity of the offers.

Changpeng “CZ” Zhao, founder and chief executive officer of the global cryptocurrency exchange Binance, is one of the most important crypto celebrities of the present day, yet his journey is one of the real rags-to-riches.

CZ was born in a hamlet in Jiangsu, Shanghai, in the 1980s, when his family immigrated to Vancouver, Canada. In college, he majored in computer science engineering and spent the subsequent years developing trading systems for prominent exchanges such as the Tokyo Stock Exchange and Bloomberg Tradebook.

CZ quit his lucrative position and returned to Shanghai in 2005 to launch his own business. After eight years of growing his business, CZ discovered Bitcoin in 2013 and his life was forever altered.

CZ was severely bitten by the Bitcoin bug in 2014, and he went all-in on the emerging digital currency by selling his home and purchasing BTC at an average price of $600 per coin. Soon after, Bitcoin’s price plummeted below $200, but CZ’s confidence in the technology allowed him to hold through the bad market. After two years, the price increased again. Nearly four years after discovering Bitcoin, CZ launched his own cryptocurrency startup, Binance, in July 2017, during the height of the initial coin offering frenzy. Five years later, in terms of daily trading volume, Binance is one of the largest worldwide cryptocurrency exchanges.