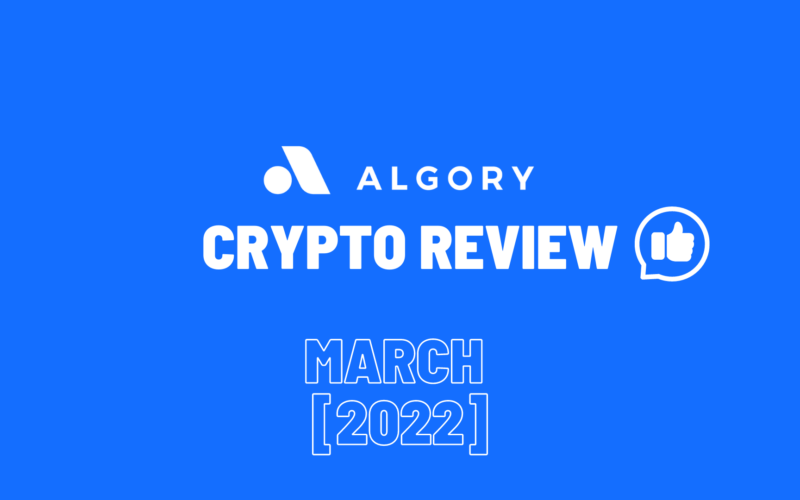 Let’s review the most interesting crypto news from March 2022. You can use Algory Crypto News Aggregator to stay up to date with the crypto world.

On Tuesday the 29th of March 2022, the Ronin Blockchain Network announced what has since been titled the largest cryptocurrency theft in history. According to their report, there had been a hack on the network about a week before. The said hack resulted in the theft of about $625 million worth of cryptocurrencyhttps://interestingengineering.com/largest-crypto-theft-625-million.

According to the network’s spokesperson, the hackers went away with about 173,600 of Ether, and 25.5 million of USDC, a stablecoin pegged to the U.S dollar.  Interestingly, the incident had gone undiscovered for a whole week until a user was unable to withdraw $5,000 worth of Ethereum from the bridge.

The network has since claimed to be taking active steps toward guarding against similar attacks in the future.

The FIFA world cup is set to take place between November 21, 2022, and December 18, 2022. We are seeing many companies and big-shot investors getting involved. In March, it was made official that one of these big-shot investors would be an established and well-respected cryptocurrency platform by the name crypto.com.

This will be the first cryptocurrency trading platform to sponsor the world’s most-watched sporting event. Crypto.com is dedicated to using this opportunity to drive significant awareness for crypto and accelerate its adoption.

This partnership will increase crypto awareness within and outside the tournament stadiums in a tremendous way.

In light of what has been going on in Europe, we have witnessed many companies creating different campaigns to send relief to Ukraine. Cryptocurrency has been used now more than ever before. Crypto enthusiasts are beaming with excitement and hope because this ushers a new era for digital currencies.

Crypto.com partnered with ICRC to launch a global campaign that raises awareness and funds to support their relief program for Ukraine and other programs.

They aired ads during the recently broadcasted Oscars calling on the viewers to donate through crypto, fiat, or the purchase of an NFT from the campaign collection.

They have continued to raise awareness on their social media platforms. The campaign alone was able to raise more than $1 million for the ICRC.

The attacks from Russia caught Ukraine off-guard and they had to think of a smart way to fund their war efforts. About two months into the war, in March 20222; Ukraine launched the NFT museum to mark the history of the Russian invasion.

They intended to use the digital assets to fund their war efforts and media activities. The Ukrainian deputy minister of digital transformation reported that the NFT collection would be like a museum of the Russian-Ukrainian war only in a special NFT format.

He assured the world that this money would not be used to buy weapons. It would instead be used to fund the media and buy military equipment. Such equipment would include bullet-proof vests, helmets, and night vision goggles.

Each NFT in the Ukrainian museum of war represents a story from a trusted news source. The Ukrainian Meta History museum of war was launched by the NFT community with the support of the Ministry of Digital Transformation.

The largest IT companies in the country, together with the Kyiv School of Economics and the Ministry of Digital Transformation created the Truth Fund. This fund was created to fight Russian propaganda and tell the world the truth about the war in Ukraine.

Ukraine reports that it has brought military supplies such as medicine, helmets, food, and bulletproof vests with crypto donations.

On the day of its launch, Ukraine was able to raise about $600,000 from the museum NFT sales. The government was able to sell over 1,000 NFTs on the first day only. The funds were directed toward rebuilding museums in the war-torn country.

NFTs were on fire in March, first the Ukrainian NFT museum of war and then the RRR NFT movie. In March, it was announced that PVR was set to launch an NFT movie in association with DVV entertainment.

For context’s sake, PVR Cinema and DVV entertainment are Bollywood entertainment moguls. They seem to be evolving as fast as the rest of the world, which was exciting news for crypto enthusiasts. DVV Entertainment is the producer of the movie ‘RRR’.

The NFT movie was special to the winners of a contest that ran from March 20 to March 25, 2022. People who buy the tickets of PRR, the PVR, or the SPI app are eligible to win 6 NFTs and have exclusive digital rights to that movie.

Imagine the excitement that took over the internet when the Malaysian Ministry of Communication and Multimedia proposed that the central authorities of the nation should regulate crypto assets as legal tender in the nation.

This announcement was made as an effort to promote crypto among the nation’s youth and thus foster their financial inclusion. Passing this law will include Malaysia on the list of countries that are regulating crypto assets.

The officials are hoping that once the government has legalized crypto; more youth will adopt it.