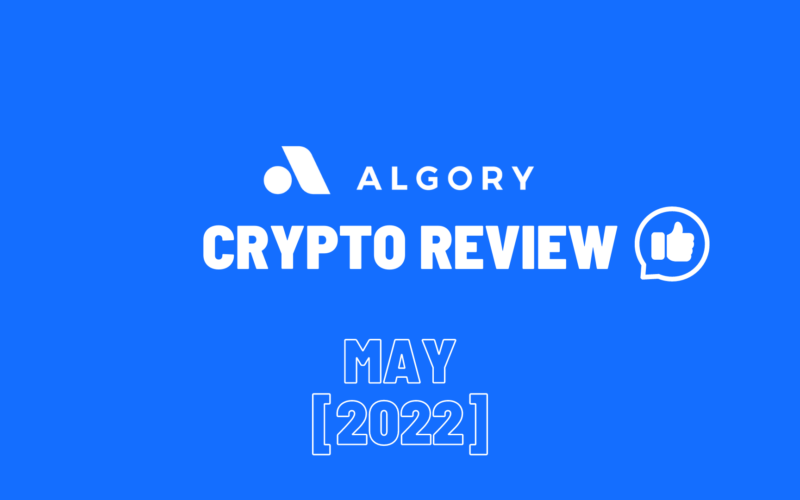 Let’s review the most interesting crypto news from May 2022. You can use Algory Crypto News Aggregator to stay up to date with the crypto world.

1. The collapse of the UST/Luna token

When a prominent stablecoin and the token that backs it fails, the broader ecosystem certainly is dealt a blow. These last couple of days have been bleak for most investors as many people lost their money because of the recent crypto market crash. The crypto market has been in turmoil, exacerbated by the collapse of Luna and the UST stable coin both tied to the terra Blockchain.
The reason why this news caught the attention of many is that TerraUSD (USDT) is a stablecoin which means that it is supposed to stay at $1. What’s more, the crypto token that backs UST, LUNA, also lost virtually all of its value. These losses have been widely reported, and it has been all that people are talking about for a while.
Over $17 billion in crypto value has been wiped out, and the collapse has raised questions about stablecoins in general. The crash even caught the eye of politicians and regulators.
As for what’s next, the company behind UST will be building a new Blockchain, though it won’t include a stablecoin.

Luxury brands seem to be taking a leap of faith into the world of crypto. First, it was Tesla, then Off-white, Hublot, Franck Muller, Norgain, Phillipp Plein, Equinox Group, and now it’s Gucci. In the first week of May, Gucci announced that they would be accepting 12 cryptocurrencies at a few select stores. The coins include Bitcoin, Shiba Inu, Bitcoin Cash, Dogecoin, Litecoin, Ether, Dogecoin, Wrapped Bitcoin, and 5 U.S dollar stablecoins.
This came as no surprise as Gucci has been on a Web3 adoption spree. At first, only five of its stores within the United States will accept crypto; they include locations in New York, LA, Las Vegas, Atlanta, and Miami. However, over time the service will be extended to all of their 111 stores in North America.
The employees continue to undergo training and education on Crypto, NFTs, and Web3 in preparation for the launch. Customers paying with crypto will receive an email with a QR code to pay via their digital asset wallet.

3. Buterin Donates $4 in USDC to UNSW for pandemic detection tool

Ethereum’s co-founder Vitalik Buterin made headlines when he donated $4 million worth of USDC to the University of New South Wales (UNSW) to support the development of a pandemic detection tool. This was part of his self-described ‘moonshot anti-COVID effort’.
The funds will further support the development of the Shiba Inu Open-source Intelligence-based EPIWATCH tool, which utilizes artificial Intelligence and Open-source data to create early pandemic warning signs. The tool scans millions of items of publicly available online data, including social media and news reports to detect any changes that could suggest increasing health concerns.
He emphasized the importance of sharing data in a decentralized and open manner to speed up pandemic detection. EPIWATCH does not depend on people making reports, it is a great equalizer and can overcome weak health systems and censorship.

4. Panama’s president refuses to sign the Crypto bill into law

Panama’s President Laurento Cortizo, refused to sign off on a crypto bill recently approved by parliament unless more anti-money laundering rules are added. Although he thought the legislation was good and innovative, he still felt that it needed to go through legal checks before reaching his desk.
He approves of certain aspects of the bill but the possible illicit uses of cryptocurrencies still needed to be addressed. The parliament had passed a law that was aimed at regulating the use and trading of crypto assets, and their issuance among many other things. If passed, this law would likely give residents and businesses the option of using and accepting cryptocurrency; businesses would not even need a special license to accept crypto.
The passage of the law would help foster financial inclusion in Panama and create additional employment opportunities. In contrast, it would enable greater fraud, cyberattacks, and criminal activities. That is why the president needs a clear analysis of the possible risks of this regulation.

This past weekend was the 12th anniversary of Bitcoin Pizza Day, which marked the first time that some unit of value was placed on Bitcoin. It happened back on May 22, 2010, when Laszlo Hanyecz, a Florida-based software engineer paid 10,000 Bitcoins in exchange for two Papa John’s pizzas. At today’s price, that is equivalent to nearly $300 million which begs the question; is $300 million too much for two delicious pizzas?
Crypto enthusiasts all over the world celebrated this important day in various ways. For instance, CoinTelegraph spoke to the crypto community about their historic BTC purchases in recognition of this important day. Some revealed that they bet using Bitcoin, or bought pieces of art that they have to this day. People continued to speculate about where the money from the pizza purchase went; who did it go to?
To top that, the CoinTelegraph store also introduced new Bitcoin Pizza Day merchandise for crypto enthusiasts. As if that is not enough, PizzaDAO celebrated Bitcoin Pizza Day with 100 parties worldwide. What could top that? How did you celebrate Bitcoin Pizza Day?

eBay is one of the latest companies to enter the NFT space; they recently launched their first-ever collection of NFTs. This collection is set to be launched in partnership with OneOf which is a web3 platform. OneOf is an NFT platform that brings innovation to the world of sport and music. It supports multiple energy-efficient Blockchains to provide sustainable NFT collections.
The reason why eBay chose to bring this to the forefront is the late expansion of the collectible market. You don’t have to be a crypto expert to buy, sell or collect NFTs. The NFT collection comprises a series of tokenized collectibles featuring National Hockey League legend Wayne Gretzky.
The collection depicts animated versions of Gretzky that were inspired by Sports Illustrated magazine covers. It is up for sale on EBay’s marketplaces now. This move by eBay is now making coveted NFTs more accessible to a new generation of collectors everywhere.

Cryptocurrency exchange, Coinbase has created a ‘crypto native think tank’ in an attempt to help shape the global conversation around policies for digital assets. The newly formed Coinbase Institute will also public research on crypto and Web3.
The think tank features an advisory board of finance and law academics from top United states Universities and will publish original research to shape policies around crypto. The institute has already published the first set of reports explaining key issues in crypto. It has tackled the question of the high-energy consumption of proof-of-work Blockchains like Bitcoin.
The first monthly insight report in crypto markets was also released, which compared market movements in crypto and traditional finance. Each report will focus on a particular theme. This is yet another attempt by Coinbase to influence the conversation around crypto. They have always been dedicated to combating misinformation and mischaracterizations about Coinbase or crypto being shared in the world.